How Important is Human Interaction: The Looming Threat of the World Wide Web War

Would you risk it all to meet and explore the shutdown world?

Every morning, Sandy rolled over in her bed to a computer screen light in her face. It already sensed that she was waking up. Like the countless days before, she logged onto her computer and chose her chat room of the day. The chat rooms were based off of Usenet newsgroups as discussion systems for topic-specific groups.

On Sundays, it was dedicated to family. Sandy mostly liked to talk to her Dad who would tell her stories from the old days. As a 24-year-old, she could never experience the human interaction that made him so nostalgic. He often reminisced of life before the threat of the World Wide Web War. It slowly started to loom over their heads like a silent shadow reminding them why they should always be online and not leave the house for long periods of time in fear that they would be disconnected and therefore unmonitored. He usually talked about how online communication was only the first step before in person interaction like going out to eat, meeting at a bar, or walking through the park.

Sandy hated the World Wide Web War. The Silicon officials feared that in person interaction would discourage people from connecting signals to Silicon. This meant that people would have to start using virtual platforms like MUDs to search for a sense of community. But the underlying reason was for Silicon officials to monitor your actions to ensure a World Wide Web War would not take place.

The Silicon officials were the bigwigs who felt like it was their duty to protect us from the World Wide Web since the Internet was never invented like planned. No one knew exactly who they were or what they looked like but the guards would walk around monitoring the world. They threatened the World Wide Web War so they gained power and popularity by claiming to protect us from the war by shutting down the possibility of the Internet. The Silicon officials had created Usenet from which our discussion boards were made. No one really knows much about the mysterious Silicon officials because they are the only ones that understand the history of the Internet. I think we could know more but they do not want us to in order to prevent us from ruining the Internet.

Honestly, it was nice knowing that you shared something in common with your chat room peers and would not feel the awkwardness of talking to a complete stranger and finding nothing in common. But Sandy had had enough. She knew she had to get out and meet people in person. She was able to find a secret, underground chat room that spoke in code but included several other people who wanted to escape too. 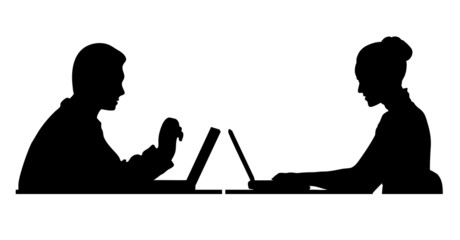 After joining, she picked up their plan quickly to breakout on the night of September 21st. For days they studied how the motion sensors on their computers worked that would sense when you went to sleep and woke up. Sandy realized that if you fell asleep at the same time every night, the computer would begin to run automatically and assume that you were asleep by that time.

They were in agreement that although these chat rooms provided a sense of community and inclusion, being online is two-dimensional. It was very flat, straightforward, and lacked depth. Unlike the virtual world, the real world allowed you to relate over experiences and adventures because it forced you to grow your community as you grow yourself and broaden your sense of belonging.